After playing fingerstyle guitar for 12 years I decided to take a turn into harp guitar. After all, many of my guitar heroes like Michael Hedges, Stephen Bennett, Antoine Dufour and Andy Bacon played them and it seemed, I don't know, kind of weird in a good way. So I bought one and have been enjoying the learning curve! However, after studying Gregg Miner's website (www.harpguitars.net) and learning about the history of these beautiful animals, I became enthralled with the prospect of rehabilitating a Dyer Symphony Harp Guitar. Little did I know how difficult it would be to find one. To begin with, I wrote letters to a long list of luthiers, guitar stores and dealers inquiring as to whether they had one, or would let me know if they heard of one for sale. As the months rolled on, it became clear that locating one would be particularly difficult. Then an incredible break.

I learned that someone who lived less than a mile from me had recently purchased one at an estate sale, had rehabilitated it and was going to list it for sale. I was able to get in contact with this seller that same day and met at, where else, Starbucks, to see the goods. He and his dad brought it in an electric keyboard bag! The supposedly restored instrument was a wreck! Old strings, high action, a newly installed crooked fingerboard complete with excess glue, newly installed bridge with uneven string spacing, nut out of alignment, saddles for subs and guitar strings not in balance, tuners hardly worked, cracks unrepaired. Simply a mess and unplayable. Also, it was very hard to hear it with the cappuccino machine running full time! 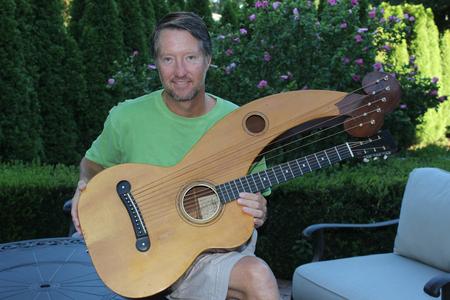 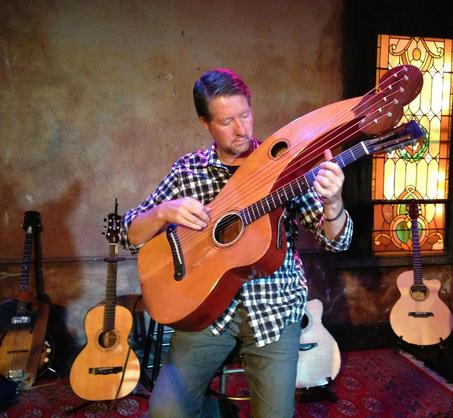 Anyway, these folks had done their research and knew what they had - even though they damn near ruined it! No bargain was to be, but I was finally the proud owner of a messed up 1906 Dyer Style 5! Is this luck or fate? Now what do we do?

I had worked with Charlie Hoffman of Hoffman Guitars (www.Hoffmanguitars.com) in Minneapolis on some of my guitars over the years. Since he's from Minneapolis and Dyers were made in St. Paul, he's seen a few in his shop over the years. Even though he has made a few harp guitars, is a respected luthier and guitar tech extraordinaire, he told me the real expert on Dyer restoration was Michele Beardsley of his shop. Michele and I chatted at length about what my goals were with this instrument - to make it play like new but to retain its historical integrity. This means we would make it completely playable and that it would intonate correctly but that we would leave it looking like a 100 year old instrument.

As such, we replaced everything we practically could: the fingerboard was replaced with one that is consistent with the original design, new frets, nut, saddles and all tuners. A new bridge was hand made that also replicates the original. All cracks were repaired and reinforced as required. We did not touch the exterior of the instrument other than to address structural issues. Dieter Kaudel of K & K Sound (www.KKSound.com) made a custom pick up for it utilizing contact pick ups for the guitar and a Fantastick piezzo for the subs – great separation!

The instrument still has all its hard earned dings, scratches and distinctive discolorations. It definitely looks 100 years old. But it plays wonderfully and sounds incredible! I am truly touched by the sound of this harp guitar. And I'm grateful to Michele who was extraordinarily patient and responsible in its restoration.

I hope your as excited to see the process and results as I was! You can check out the photos >>>>