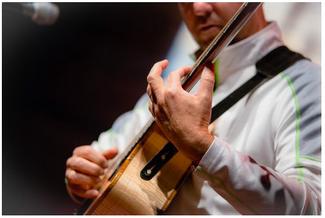 1999 - Learning An ArT I have been fortunate to study under some of the top pioneers of the genre including, John Stropes  (past President of the Milwaukee Classical Guitar Society, Chairman of the Guitar Department of the University of Wisconsin Conservatory of Music and transcriber for Michael Hedges, Leo Kottke, Billy McLaughlin, Alex DeGrassi, and others), Billy McLaughlin(noted finger-stylist who specializes in the tapping technique), Don Ross (two time winner of the National Fingerstyle Guitar Championship) and several other guitar heroes.

2001 - Mark Hawks and I Co-founded the Michigan Fingerstyle Guitar Society, A non-profit organization that promotes the appreciation of fingerstyle guitar through concerts, workshops and goodwill. Today the society is run by our president Ron Stavale and board members Jeb Mcyntire, Dave Pierson and Rick Haden.

Present – where i am now I perform extensively on a local basis and on multiple occasions I have been honored as one of the featured performers at the Healdsburg Guitar Festival in Healdsburg, California. My repertoire is eclectic, ranging from Beethoven and Tchaikovsky to contemporary fingerstyle artists and my own originals. My performances usually feature "heavy mental" pieces performed on a harp guitar, baritone guitar and good ‘ole regular six string guitar in alternate tunings.

​1974 - THE YEAR IT ALL BEGAN My mom and I, dressed in matching western shirts, headed out to see John Denver in concert. I was 14 years old and the live music brought me to life! I went home and picked up my first guitar. I love making music but, after playing in various garage bands and in a pop/rock duet throughout my college days at MSU, I quit playing entirely.

1998 - The SUMMER OF INSPIRATION  I saw Leo Kottke perform at Borders Bookstore and I was so inspired, I decided to exclusively pursue the "finger-style" technique. The finger-style technique is characterized by manipulating the strings with your fingers only (no picks!), utilizing a steel string guitar, which is more often than not in an alternate tuning. The technique incorporates unusual practices including percussive slaps on the guitar, tapping (left hand plays independent melody while right hand executes bass notes), two hands over the top of the guitar, etc.